Opinion | How Unions and Small Business Can Fight Monopolies 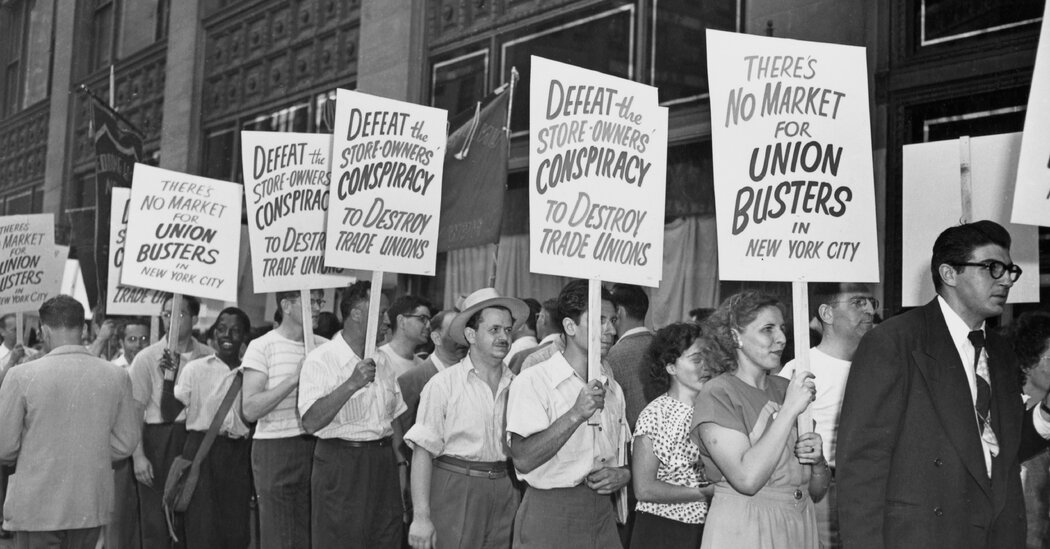 In a welcome joining of forces, labor unions and small-business advocacy groups this month supported an antitrust bill that would give New York State sweeping new authority to sue corporate titans like Amazon for abusing their market power in ways that harm competitors or workers.

Labor and small business make an unusual political pairing these days. The idea that small businesses are aligned with big businesses and opposed to labor unions took hold in the 1980s and has been conventional wisdom ever since.

But this alignment wasn’t always the case. In the decades after the Great Depression, unions and small businesses were natural allies in a New Deal coalition that backed muscular policies to limit corporate power. Fortunately, a growing antimonopoly movement is rekindling this alliance, which could be critical in reversing labor’s long decline.

The defeat of a union organizing drive at an Amazon warehouse in Alabama in April underscores the challenges labor faces today. If unionizing one warehouse alone is a steep uphill fight, it’s hard to imagine that workers could organize the entirety of a sprawling colossus like Amazon or Walmart.

The problem isn’t only that labor law gives employers the upper hand during organizing drives. It’s also that workplace organizing on its own has never been a sufficient strategy in the face of highly concentrated corporate power.

A key reason unions thrived from the 1930s through the 1960s was that the government aggressively wielded its authority to break up big businesses and lessen their dominance. Federal officials brought hundreds of antitrust cases against large corporations in those years. For its part, Congress passed laws to constrain Wall Street, limit mergers and prevent concentration in agriculture, banking, communications and retail.

This multipronged attack didn’t just make big businesses easier to unionize; it also enabled more people to operate their own farms and businesses without being crushed by monopolistic giants. For Democratic politicians and activists in that era, small businesses and unions were two sides of the same coin, both shifting economic power into the hands of ordinary people. As President Franklin Roosevelt put it, the aim of the New Deal was “economic freedom for the wage earner and the farmer and the small-business man.”

This populist, antimonopoly approach to the economy produced a growing middle class. It also forged an alliance between labor and small business that would sustain progressive economic policies for decades.

To see how labor and small-business strategies reinforced each other during the New Deal era, consider the grocery industry. In the 1930s, grocery retailing was dominated by A.&P., a 16,000-outlet chain and the nation’s fifth-biggest corporation. A.&P. brutally suppressed organizing among its workers, shuttering stores and firing people at the first sign of union activity. It also used its market power to squeeze suppliers and muscle small grocers out of business.

In 1938 and again in 1944, the government sued A.&P. for attempting to monopolize the grocery market. Those suits ended many of A.&P.’s predatory tactics against small grocers and forced the company to jettison its wholesaling division. A.&P. would continue to operate for decades but was no longer the domineering force it had been. As these cases were unfolding, A.&P., fearing further government action and desperate to cultivate good will, agreed to stop interfering with union organizing in its stores.

The result was a grocery sector in which unions and small retailers both flourished. In the 1940s, ’50s and ’60s, a growing share of people at A.&P., Kroger and other supermarket chains joined unions and won higher wages and benefits. At the same time, many Americans made a living running their own grocery stores. Independent stores accounted for half of grocery sales in the mid-1950s. Of the 1.1 million people working in grocery retail in 1954, about one in four owned or co-owned the store in which they worked.

Perhaps the greatest benefit to working people of this period was the political coalition that antimonopoly efforts forged. The largest federation of unions, the A.F.L.-C.I.O., routinely spoke up for small businesses, calling for the government to extend more low-cost credit to them and advocating tighter limits on mergers to prevent small businesses from being “unmercifully squeezed.”

Backed by a coalition of labor unions, small businesses and farmers, Democrats sustained congressional majorities for much of this period, enabling, among other things, a steeply progressive income tax and a minimum wage much higher (adjusted for inflation) than today’s.

Then, amid the economic chaos and inflation of the 1970s, the Democratic Party abandoned its antimonopoly stance, reasoning that consolidation would benefit consumers. In the following decades, as big corporations grew and amassed power, they used it to attack both the rights of workers and the viability of independent businesses and family farms. Unions have shrunk and small businesses have declined sharply. Support for Democrats has all but vanished in small towns and rural areas.

Today, the conditions are ripe for a new antimonopoly coalition. The top worries of many small-business owners are much the same as those of organized labor: the outsize market power of corporate giants in industries like retailing and health care, the political influence of big business and, above all, Amazon’s relentless aggression in asserting its market power.

There are already glimmerings of an alliance. A new coalition of small-business groups has collaborated with Athena, a network of worker and racial justice groups, to push for legislation to rein in Amazon and reinvigorate antimonopoly policies. (My organization is part of both coalitions.) Last year, several unions, including the Teamsters and the Service Employees International Union, petitioned the Federal Trade Commission to take action against Amazon, both to protect workers from “unbridled market power” and to “level the playing field” for small- and medium-size businesses.

Bringing an antimonopoly agenda back to the fore of American policymaking would strengthen the hand of both workers and small businesses. And it would reorder our politics, at long last giving working people enough leverage to tip the scales of economic justice in their favor.

Stacy Mitchell (@stacyfmitchell) is a co-director of the Institute for Local Self-Reliance, a nonprofit research and advocacy group that seeks to protect communities against concentrated economic power.

The Times is committed to publishing a diversity of letters to the editor. We’d like to hear what you think about this or any of our articles. Here are some tips. And here’s our email: [email protected].