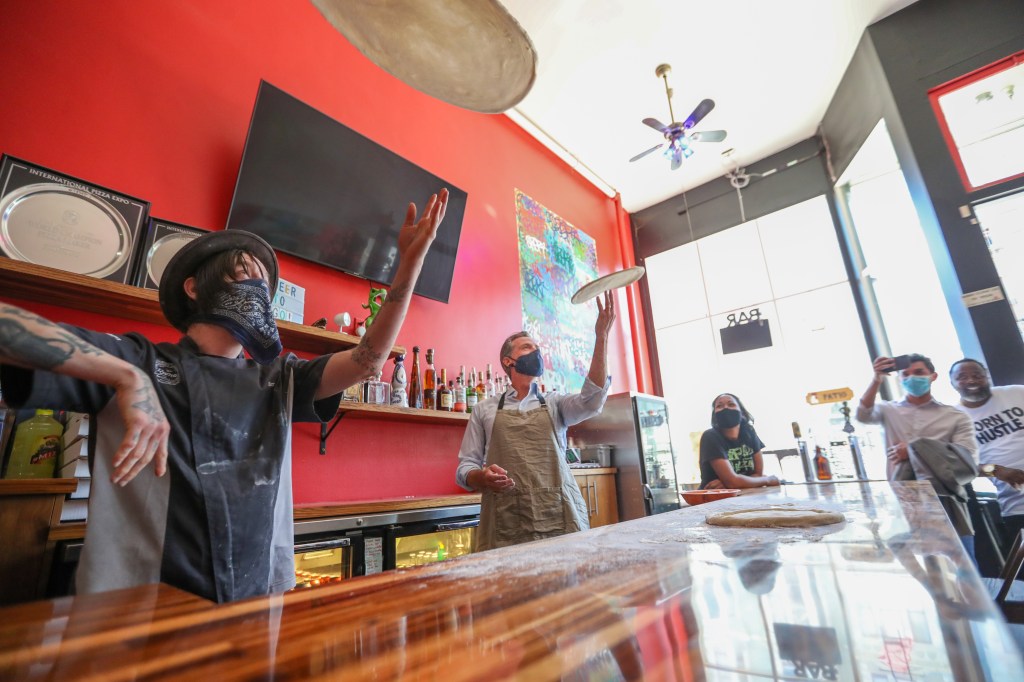 OAKLAND — Gov. Gavin Newsom FaceTimed with Marshawn Lynch and twirled pizza dough in Oakland on Thursday in an event to promote California’s support for small businesses but which also highlighted many of the barriers entrepreneurs of color have faced in tapping into state and federal financial assistance.

The governor was joined by Mayor Libby Schaaf, state Sen. Nancy Skinner (D-Oakland) and Alameda County Supervisor Wilma Chan, all of whom urged residents to get back to shopping and eating in person at small businesses in their community.

“This is our moment to put our wallet where our hearts are and that means come back, spend your money, stop that ordering out, maybe take a break from the Amazon, come in and meet these amazing entrepreneurs,” Schaaf said. “They are culture keepers, they are community gathering spots. That is not something that you get when you click.”

The 4.1 million small businesses in California are critical to its recovery, Newsom said. They employ nearly half of all of the state’s workers, and they are a central component to what makes each community and city unique.

Skinner echoed that sentiment, also pointing at fees the state has temporarily eliminated in a bid to get struggling businesses back on their feet.

The governor first stopped at the Beastmode Barbershop, which opened shortly before the pandemic and had to close for 11 months, owner Tyranny Allen said. He opened the shop after football superstar Lynch purchased the property.

“He gave us the keys and said start a business and that’s exactly what we did,” Allen said. “The key is ownership, so that way we can afford the rent.”

Allen, who later called Lynch on FaceTime so he could say hi to the governor and the other elected officials, said he was appreciative of any help the government could offer small businesses. But his shop wasn’t eligible for any grants or pandemic support loans, he said, adding that they couldn’t qualify for federal Paycheck Protection Program loans because his staff is all independent contractors.

Newsom then went two doors down to Graffiti Pizza, which also first opened shortly before the pandemic but was able to stay afloat with delivery and takeout service. There he rolled out some dough, twirling it in the air and then tasting an already-made slice of cheese pizza. Executive Chef Matt Molina said he was “actually really impressed how well (Newsom) threw the pizza.”

Speaking afterward, the governor touted the state’s small business relief grants of which $2.5 billion have been distributed so far. About two-thirds of recipients have been people of color and slightly more than half are women. An additional $1.5 billion will be distributed with a greater emphasis on diverse business owners, he said.

“We can’t come roaring back unless small businesses are fully back,” Newsom said.

As part of efforts to bring residents back outdoors, the state is expected to announce a vaccine verification system tomorrow, Newsom said, saying it’ll be an open-source program and again insisting it will not be a vaccine passport.

“It’s basically taking a card that is a physical card and digitizing it,” he said. “It’s as simple as that. There’s no passport in California.”

Graffiti Pizza co-owner Davina Dickens said having the elected officials visit was a big deal. She was able to get a PPP loan but not any grants, in part because she opened shop in late 2019 and didn’t have previous sales data to show the losses from COVID-19.

She’d like for the state “maybe to just loosen some of the guidelines to the applications,” she said. “You have to take into account business owners who opened right before the pandemic, it’s kind of a big deal I would think.”

Cathy Adams, president of the Oakland African American Chamber of Commerce, said she’s optimistic about additional assistance for her organization’s members who have been hard-hit by the pandemic but have struggled to apply for loans and grants.

“Some of the businesses have one owner, you don’t even have the time to fill out the grants,” she said. “I know a lot of people that need money for back rent, they’ve had these leases — some of the landlords have not been as amicable, they uproot them so they can get higher rents.”

She said she was heading right to her office to start getting resources together for her members and other small business owners of color, potentially partnering them with people on her staff who could help them fill out the applications.

“They’ve got the money and (Newsom) said that the Black and minority businesses are going to be a priority,” Adams said. “If not, I know how to reach him on the phone.”